The long-awaited third album from the notorious COMBAT WOMBAT

Just Across The Border is a hip hop album with a revolutionary attitude. Paying equal homage to sound system dub reggae and the golden era of hip hop, it was recorded and produced in Monkey Marc’s solar-powered studio in Melbourne, Australia. From bass-heavy speaker-blasting hip hop to cinematic musical epilogues, Just Across The Border is truth-exposing, riot-inspiring music to tear down borders and break down the walls of racism and injustice we live under.

Over the past 18 years since the band’s inception, the world has witnessed many changes – some for the better, some for the worse. Combat Wombat continue to keep their eyes open, ears to the ground and mega-phones switched on toward their ongoing grassroots creative movement and musical engagement with communities both here and abroad. Each individual crew member has been on their own epic journey, with stories of life, death, children and musical adventures. Just Across The Border is the culmination of the last ten years of their experiences and insights, as they venture off in different directions around the planet, and return to collaborate for the brief moments that they are together in one place. 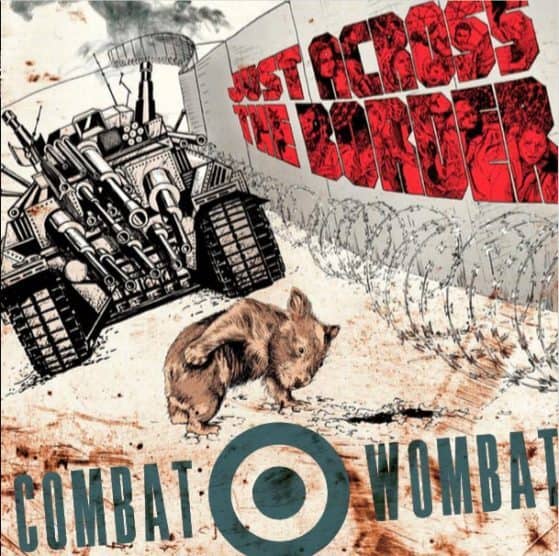 For full quality and full length downloads go to https://combatwombat.bandcamp.com/album/just-across-the-border  OR Preorder Vinyl from http://www.pumpkinrecords.co.uk/